We had access to the hall that the club meets in for the whole day on Monday so there was a chance to have a proper big game of FFT3. Alan was keen to dust his forces off for a game and Bill wanted to try the rules out so the game was on – unfortunately Des who was slated for a command too couldn’t make it on the day so it would be the 3 of us (once Bill had finished with his Dystopian Wars game!).

Alan would be bringing the 14me DLB so a decent sized force for an all day game with French Divisions being in between a ‘standard’ division and a brigade in size. To counter this force I would be bringing the majority of an alt-history Polish Mechanised Division. This gave about the same number of tank bases each although the French outgunned the Poles by dint of their 105mm armed AMX-10RC’s and plethora of Milan atgm.

The opposing forces were as follows:

Both forces had Jaguar aircraft in support, with the French having Gazelle helos armed with HOT and the Poles Mangusta armed with ZT.3 atgm and 20mm Cannon available too.

The scenario was a classic wargamer friendly meeting engagement: The French had intervened in the Polish invasion of Lithuania (see last game) and the 14 DBL was tasked with finding and stopping the advance of the Polish 5th Mechanised Division as it moved north around the west of Kaunas. We diced to see what table edge we came in on and ended up thus:

We would be starting the battle with some forces arriving on the table on the first move (1 Regt for the Poles and 2 for the French) and all subsequent units had to be paid for from Command Pips won during initiative rolls. Alan chose to start by bringing his Armoured and Light Armoured Regiments on first, I went with the Cavalry Regiment. Luckily for me I won the initiative for the kick off and belted my column of vehicles down the road, the plan being to get the infantry component into the town along with a company of Cougars whilst another Cougar company and an ERC-90 company fanned out to the left of the town, taking the hill there (‘the Pimple’) to enable observation of the French deployment. The remaining VBC and Cougar companies would be held at the edge of Raudonas Wood on ‘my’ side of the stream as a reserve. The idea was to hold the French up as long as possible and bring on the Mech infantry next to shore up the defence where needed, then counter with the Armoured Regiment once the French had hopefully been softened up. 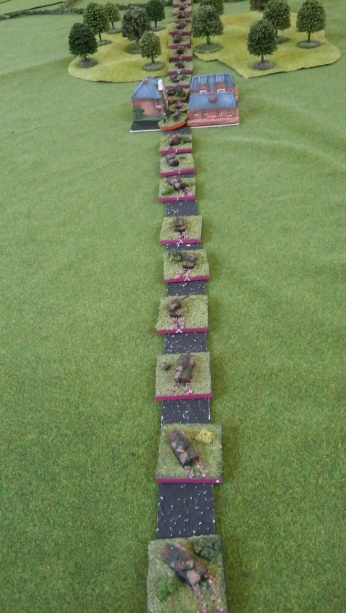 ..and winds forward to the stream

Alan started off by advancing half of his AMX-30 regiment along the road towards Miestą Sankryžos with 2 companies advancing towards the small ridge to the left of Pilkas (as you look at the above photo) with the AMX-10RC’s advancing to take position along the large L-shaped hill on the right. I feel Alan made a bit of a mistake here as the wheeled Armoured Cars might have made use of their greater road movement and managed to get to Miestą Sankryžos before me which would have really put me on the back foot. However, as I had secured the town I was feeling quite happy as it would, hopefully, take Alan some effort to winkle me out of it.

First blood went to the French when they took out a Cougar platoon that was on ‘the Pimple’ trying to get eyes on the advancing enemy and Alan decided to spend the Command Pips that he had just won on bringing on his AMX-10P Regiment too so I was now quite outnumbered but not too disheartened. I could have countered this straight away by bringing on another unit myself but I decided to spend my saved Pips on an airstrike as the sight of the French armour arrayed along the road from Pilkas was just too much of a temptation. So the call went in and a Jaguar flight duly arrived belting along the road and dropping its load of iron and cluster bombs on the foremost AMX-30 company. The effect of this strike was amazing, I managed to eliminate the whole company by a mixture of KO’s and failed quality tests but it did come at the price of the brave airmen as I rolled a SNAFU that resulted in my flight being shot down after their run. I had also managed to take out a MILAN armed Jeep company with Rarden fire from the village at this time too so things were looking rosy!

The next stage in the battle saw the fight to take control of Miestą Sankryžos which seemed at one point seemed to be drawing in every French unit on the table. Alan was determined to take the town and started to pound it with artillery whilst moving his Mech infantry forwards to take it from one direction whilst he also advanced from another with his AMX-10 armoured cars. His tank Regiment was used to clear ‘the Pimple’ which was achieved quickly and resulted in the loss of one of the Polish Cougar companies as I left them in place too long. I withdrew the 2 surviving platoons of the ERC-90 company back to the safety of Raudonas Wood and redeployed them to cover the left flank as I was worried about a French advance there. The remaining Cougar and ERC-90 companies were deployed to the stream from their reserve position in the wood to engage the French Armour from its cover for as long as possible.

The actual fight for the town was over quicker than I had hoped but it had wasted a bit of time which helped me as Alan continued to keep the initiative preventing me from gaining the pips needed to bring on my other units, indeed I was starting to wish that I had had done so earlier when I had the chance instead of making the air attack. Luckily for me my brave lads in the companies along the stream, helped by a savage MRLS barrage, were holding their own against the French armour (I was continually lucky with my saving throws and Alan was having awful luck passing quality tests). Alan was also having a terrible time sorting out his units involved in the fight for Miestą Sankryžos, being unable to clear his suppressions, and this helped me no end as I knew my luck in holding the stream couldn’t last forever. Indeed just as it looked as if the French were finally ready to launch an assault on the stream I finally wrested back the initiative and by a 4 pip margin too which meant I could release both my other units which could hopefully save the day.

Bill was now ready to join in at this stage so he took command of the Armoured Regiment and I took the Mechanised Infantry and a mass of Polish units now moved into view behind Raudonas, armour on the left and infantry to the right and both advancing quickly. This new threat seemed to upset the French as they now seemed to decide to go on the defensive even though they had started to whittle down my defending Cavalry units. The Poles now kept the initiative and brought on a Mangusta attack helicopter flight to further add to the pressure as it sat to the rear of our position looking for targets. Bill had wasted no time in advancing his tanks towards the confluence of the two streams in front and to the left of Raudonas Wood. He started to engage the French tanks whilst pushing forward one of his Mech Infantry companies forwards to outflank the French position on the hill covering the extreme left flank, again aided by a massive MRLS barrage that virtually wiped out the AMX-30 company there.

I had moved my Mech infantry to the hill to the right of Raudonas Wood and placed my ATGM and VBC-90’s there hoping to engage the French across the stream. I pushed my tank company towards the bridge between Miestą Sankryžos and Dvaras looking to engage the French armoured cars stationed there. The infantry was split with 2 companies heading into Radonas wood to relieve the Cavalry holding out there and the remaining two companies heading for wood near Dvaras to go on a long right hook around the French flank. Alan did manage to inflict some damage on me, taking out  the tanks and armoured cars but elsewhere things weren’t going so well.

Even with his newly arrived VAB mounted infantry regiment taking up a defensive position along the low ridge by Pilkas it looked as if his right flank was about to be turned and Bill’s tanks would soon be free to exploit in the French rear. With his losses to the other Regiments and with the Poles starting to move around his left too Alan decided that enough was enough and before his position turned into a ‘sac de mort’ we called the game as a, albeit narrow, Polish victory.

Things could have gone much differently though, the heroic (and seriously jammy at times!) sacrificial stand of the Polish Cavalry along the stream really knackered the French plan as did their problems getting the units sorted out after winning the town. In the end I gained enough time to finally win back initiative to enable me to bring my other units into the fray which tipped the balance at last to the Polish favour. It was a tough fight all round and many thanks to Alan and Bill for taking part, I hope that they enjoyed it too.

A comprehensive directory of wargames traders with detailed information on the products and services they offer.